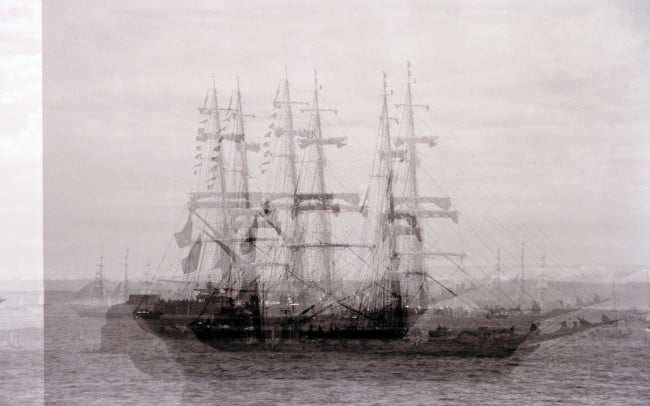 “How did you do this? Wonderful photo! It could be the Mary Rose framed in the archway outside. I can almost imagine her sailing by as I stand on the defence wall and look out over the harbour.”
The enthusiastic exhibition visitor stood beside me, and I looked down on the little man, garbed in the usual artist attire. A shapeless jacket, corduroy trousers that gave the impression of having spent a few nights on the sofa with dogs, brocade waistcoat and the compulsory facial hair. The Ghost Ship was the focal point since the exhibition launch at the Square Tower yesterday evening.

“It’s definitely not the Mary Rose. She’s down the road in the museum and I doubt if you would see her sailing by,” I spoke with my usual sarcasm. “The photo was taken at the Tall Ship Race a few years back, so not quite a Tudor galleon.” I didn’t mention that I couldn’t explain how the sepia enlargement had turned out this way.

I had gone to collect the proof prints and negatives from Sam and he had asked the same question. How did I do it?

“This.” Sam handed me the photo.

It was one of the Tall Ships sailing past Spitbank Fort and into the entry to Portsmouth Harbour. But the image was blurred. Not just one shadow image as when the photographer moves the camera inadvertently, but three. None were aligned either left or right, but appeared on both sides of the original image. They were neither up nor down, but all around the original image. As if enlarged. A series of superimposed shadows. Encompassing the hull was a darker fourth shadow with no detail.

“This is really weird.” I studied the print and tried to remember if I had trembled or been jostled by the spectators when taking the photo. “No, I didn’t move or do anything in particular.” Had the 35mm spooling slipped?

“But up and across at the same time? Show me the camera, Jake.” Sam opened the back of the vintage 35mm manual Leica.

We both examined it and decided there was nothing wrong with the winding mechanism. He took the strip of negatives and scrutinised them.

“It’s as I thought. Nothing wrong with your camera, but take a look at this.” He held the negatives up to the shop lighting.

The two other tall-masted boats either side of the Ghost Ship were clear and precise. I had caught the ‘perfect white’ of bright sun reflecting off the hulls’ wash. Great photos, I thought. But the Ghost Ship image was shrouded in mist, as if taken on a low-cloud winter day when the light isn’t good.

“I don’t get it. What a brilliant photo. Fascinating.” I clutched the print and tried to think how I could have inadvertently achieved the effect. No reasonable explanation was forthcoming.

The Tall Ship Race celebration in Portsmouth had been an exciting opportunity for a debutant photographer like me. I had loaded my favourite Leica with a 35mm sepia film and wandered through excited throngs, down along the seawalls to The Hard, following the tall-mast gathering’s progress. Today I stood in the Square Tower with my photographic exhibition displayed around me, surrounded by different crowds but all still in awe. The same enthusiasm as when watching thirty or so high-masted tall ships from around the world sailing into Portsmouth Harbour. The Ghost Ship was provoking sustained excitement and since I was weary of the incessant questions about the photo, I decided to escape outside into the November air and poison myself with a cigarette.

Sea fog was rolling in from a dark Solent as I passed under the archway and onto the stone walkway seaboard of the high defences, where I had decided to grab a little shelter and anonymity. A man was standing further down the seawall, gazing out over the harbour. What caught my eye was not so much the dark weather-beaten face but his clothes. Outmoded, the kind usually found in charity shops or on an artist. A wide-brimmed hat, caped coat that met his ankles and hung loose on a massive frame. He was tall. Six foot three at least and burly, a vision from a stage play, which is why I thought him one of those arty, acting types that hang regularly around galleries. I couldn’t distinguish his face clearly. The light from the top of the defences was too poor and thick mist had rolled up to the stone bulwarks.

Foghorns boomed out over the harbour. I jumped. A haunting, desolate sound of impending doom and watery graves from an ever-present maritime past. The Mary Rose had sunk in Portsmouth Harbour. Overloaded, the theory goes. More than six hundred dead, drowned only several yards off the Portsmouth shore. She now lay moist in her display museum, under an eternal rain of chemicals designed to keep her timbers and shape intact. Most exhibition visitors likened the Ghost Ship photo to the Mary Rose. I didn’t quite know what to make of it all, couldn’t remember the name of Tall Ship I had photographed, and it wasn’t visible on the blurred photo.

Friday night revellers making their way to Spice Island pubs and modern entertainment delights of Gunwharf Quays jerked me from my thoughts and I remembered the man standing further down. He had turned his gaze from the night harbour and was now staring directly at me through a break in the slow-motion fog that swirled around us both. His dark eyes caught my gaze, entrapped it for an instant.

“There you are, Jake. What the hell are you doing? You’ve got punters waiting inside.” Sam calling me to financial reason. I allowed him to manage my affairs and he kept me in check where necessary. We were a good team, he with feet firmly planted in developing my career and keeping me from wandering into artistic vagueness.

“Alright, just taking a fag break. I’m coming.” I looked back, but the man had gone.

To continue reading this story, purchase a copy of the ‘Portsmouth Fairy Tales for Adults’ anthology!